An oil and gas project in Mozambique needed housing for its workers, and when the original distribution boards required to supply power to these houses were damaged whilst being trucked from South Africa, Chapman Freeborn came to the rescue. Two distribution boards were needed urgently, but were over 5,500 miles away in the UK.

It was going to be a challenge: COVID-19 restrictions presented some pricing issues, space on scheduled flights was scarce, and all the while flights were getting cancelled – options were running out fast. 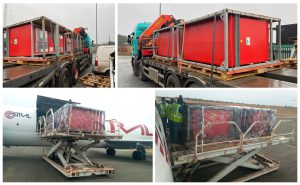 Against the odds, Chapman Freeborn was able to secure the cargo on a scheduled flight from Birmingham to Nairobi, via Dubai. However, the cargo was unable to be screened by ETD (explosive trace detection) and was too dense to pass through the x-ray machine!

This resulted in missing the first leg of the journey to Dubai just two days before Christmas…the connection to Nairobi was scheduled for Christmas Day, and the last leg of the journey (an Astral Aviation charter from Nairobi to Mozambique) was scheduled for the 29th December; would this allow for the three working days that transit clearance takes before the charter flight?

Thanks to the lightning speed of Astral Aviation the clearance happened in just one day, and the air cargo charter arrived right on time.

Chapman Freeborn overcame both challenging logistics and a challenging time of year, highlighting their expertise in navigating whatever obstacle may be thrown their way.

Aspen, Vail or Telluride anyone? There is nothing better than feeling the fresh snow under your skis. Imagine being surrounded by the trees dusted in sparkling white and spending time with your nearest and dearest. …

Over the festive period Chapman Freeborn aided the trucking arm of a large Italian freight forwarder in delivering high value luxury goods from France to the UK, enabling them to circumvent the blockade that brought…

Panel discussion: The greatest air logistic challenge of our time, how we deliver the Covid-19 vaccine globally

As the first Covid-19 vaccinations are taking place, we have come together with industry experts to discuss the challenges of transporting the Covid-19 vaccines across the world and how the aviation industry is preparing to tackle them. Watch the panel discussion.