Chapman Freeborn uses the TUI fly B767-300, converted from passenger aircraft to cargo aircraft, for the first time

Recently Chapman Freeborn was delighted to charter their very first TUI fly B767-300 passenger aircraft – but with cargo instead of seats.

The German client needed 1,400 boxes of COVID-19 test kits transported from Beijing Capital International Airport (PEK), China to Linz Airport (LNZ), Austria, and Chapman Freeborn was the perfect choice for the operation. Since the pandemic began, they have led the way in converting passenger aircraft into cargo aircraft to overcome the challenge of scare air cargo capacity and support the global air cargo market when it has needed it most. 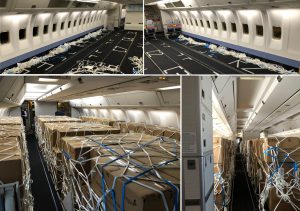 The operation from China to Austria went perfectly to plan in the converted aircraft – which Chapman Freeborn refers to as the ‘preighter’, as it is a hybrid of a passenger and freighter – and both TUI and the client were happy with the smooth and efficient transport.

To find out how Chapman Freeborn can help you with your cargo transportation requirements, get in touch with the team today by emailing cargo@chapmanfreeborn.aero or calling +44 (0) 1293 832 675.

Chapman Freeborn has operated a series of flights using several different airlines to deliver COVID-19 test kits from China to the client in Germany.

Chapman Freeborn has recently flown over 5 tonnes of time-critical cargo from Germany to the USA in a B747 freighter.

Thinking like a traveller as well as an administrator, business travel options may need to include some new traveller friendly elements. If you look at the benefits with fresh eyes, there are some that stand out and particularly given the commercial airline realities of business travel in the future. Now’s the time to review existing travel policies with a view toward “Balance.”