Siena is one of Tuscany’s most popular and most beautiful cities to visit at any time of the year. This stunning Italian masterpiece is surrounded by vineyards and olive groves, with 17 historic districts that fan out from the central scallop-shaped Piazza del Campo. The Piazza is also home to the Palazzo Pubblico and the 14th century Torre del Mangia tower that offers superb views from its rooftop.

Probably the best location to begin your visit to Siena, Piazza del Campo is among the city’s UNESCO World Heritage Sites and one of the world’s largest medieval squares. Begin your visit at the top of the square at the Fonte Gaia fountain – you can’t miss the massive red Palazzao Pubblico and its tower the Torre del Mangia, as well as many bars and restaurants.

Every Wednesday morning locals and tourists head to La Lizza market in the streets around Fortezza for a selection of delicious local provenance, including flowers, fresh fruit and vegetables, as well as household goods and clothes. There’s also a popular antique market in the Piazza del Mercato every third Sunday of the month (except in August).

Visitors to Siena will also love the city’s street festivals that are centred around agricultural events like wine and olive harvesting, as well as Carnival and Easter religious festivals.

Since Siena was constructed on hills, getting a water supply to the city required ingenious engineering. Underneath Siena’s narrow streets are a series of tunnels known as ‘bottini’ which have been transporting water to Siena from the surrounding countryside since the 12th century.

Walk among the city’s old fountains and see how water was organised. The Fontebranda fountain has basins at three levels – one for drinking water, the second is for animals and the third level for washing clothes. Fonte Gaia fountain is in the middle of the Piazza del Campo and decorated with sculptures by Jacopo della Quercia. The hidden Fonte del Casato is at the bottom of the stairs by Vicolo della Fonte, while the largest fountain in Siena is the giant Fontebranda located under the church of Santo Domenico.

The extraordinary brick tower of Mangia is part of the Palazzo Pubblico and rises 87 metres above the Piazza del Campo. Constructed in red brick – so as to appeal to commoners of the time – with the rest covered in travertine marble making it easy to spot from the surrounding countryside. The tallest tower in Italy, it was designed by Muccio and Francesco di Rinaldo and built between 1325 and 1348. 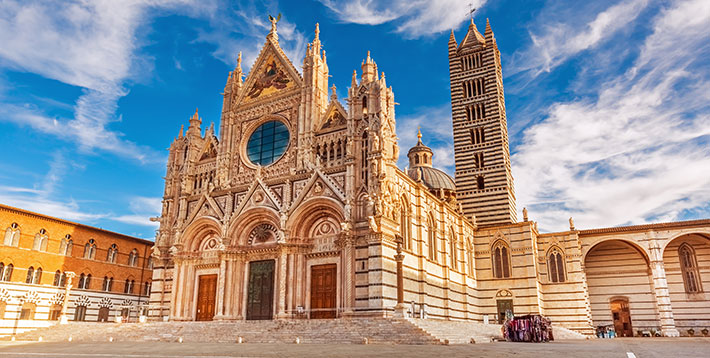 Siena Cathedral is known as the Duomo and is located above the Piazza del Campo. Built between 1215 and 1263 in the form of a Latin cross, the Duomo contains many priceless works of art by Pisano (the marble pulpit), Michelangelo, and Donatello’s St. John the Baptist. White and green-black marble with alternating stripes (the colours of Siena) are features of the interior and exterior design of the cathedral.

During summer there is a special Gate of Heaven tour that takes visitors up to the rooftop of the Duomo for spectacular views over Siena. The Bapistry is located just behind the Duomo and is where all Sienese were once baptised.

Siena is the perfect location to visit all-year-round. If you’re looking to avoid the crowds, and the high temperatures during the peak summer season, then as with much of southern Italy, the best times to visit is spring during April and May and again between late September and October. The weather tends to be cooler and there are fewer tourists. Autumn is the wine harvest season so visits to local vineyards are extra special.

Once in Siena it’s best to discover the city’s attractions on foot. Taxis can be hailed from designated ranks or booked – as with car services – from your hotel. Buy the 3-day Opa Si Pass All Inclusive Siena Pass which gives visitors 50% discount on entry to attractions such as the Opera Museum, the Crypt, the Cathedral and more.

Siena’s medieval heart is replete with fabulous monuments, churches, palaces and fountains, and offers a rich cultural scene and luxury accommodation. Siena is also ideally placed for excursions to other Tuscan favourites such as San Gimignano and the wine regions of Montalcino and Montepulciano.

To book your private jet charter travel to Siena, contact us today.

Düsseldorf is located on both sides of the Rhine River in western Germany. Visit the city’s east bank for Old Town attractions that include the Schlossturm, Marktplatz and some of Düsseldorf’s most well-known bars and…

Basel enjoys a scenic location on both sides of the River Rhine (connected by six bridges) and is conveniently just a stone’s throw from the French and German borders. Basel boasts an eclectic cultural heritage…