Gerhard has been with Chapman Freeborn for 7 years and was recently promoted to the new role of Regional Charter Manager IMEA – Cargo. His career in aviation began 20 years ago, and he has worked in several areas of the cargo industry.

“I started in aviation in 2002 as an export agent for Lufthansa Cargo, managing Air Botswana, Lufthansa and Singapore Airlines cargo flights. I went on to qualify as a Loadmaster for MD11-F and B747F aircraft.” Gerhard also worked for Upington Ground Handling Company looking after aircraft ramp and cargo handling, and then in Johannesburg at Swissport Cargo and BidAir Cargo as Branch Operations Manager, looking after both domestic and international cargo flights as a Ground Handling Agent. 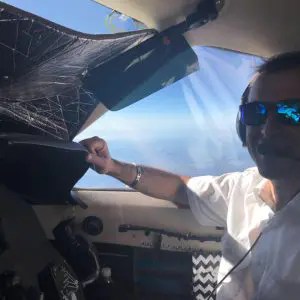 Gerhard in the cockpit of his favourite aircraft, the Pilatus PC-12

Gerhard decided from a young age that he wanted to work in the aviation industry, originally wanting to be a pilot, “Since the first time I flew I grew a passion for aviation. I have always seen my career steering in this direction, and now I’ve been doing it for 20 years.”

In his time at Chapman Freeborn Gerhard has worked on countless interesting projects, but there is one that particularly stands out for him, “We operated a series of 20 B747F charters for a customer over the span of 5 months. These were not normal loads; we loaded 20-foot connector pallets, each weighing almost 30 tonnes with cargo that measured up to 16 meters!”

Over the next year Gerhard is looking forward to further growing the South Africa division of Chapman Freeborn. He explained, “My goal is for us to grow from strength to strength, ultimately being the leading charter provider in the IMEA region.”

At Chapman Freeborn, our colleagues are our greatest asset. Not only are they excellent at their jobs – wherever that may be within the business – but they are all passionate about aviation.

Fly to the Maldives with Chapman Freeborn and experience paradise on earth!

The Maldives archipelago is a sprawling group of 26 atolls and almost 1,200 islands, each one surrounded by the turquoise waters of the Indian Ocean. Immaculate, palm-fringed beaches, gently sloping coasts and luxurious hotels offer…

Sport and travel are set to be reunited in 2022 for a thrilling year of action which culminates in a World Cup in Qatar – with plenty of exciting stop-offs on the way. Below are our highlights of what to look out for in 2022.