Chapman Freeborn Australia has chartered an Antonov AN124 aircraft to transport four Bell 214B helicopters from Australia to Athens to aid in fighting wildfires in Greece.

The fires have been spreading throughout the Euboea, Peloponnese and Attica regions of Greece since the start of August, with over 287,000 acres impacted. Australian helicopter operator, McDermott Aviation Heli-Lift Australia, has transferred their helicopters and crew and are supporting emergency response and fire suppression operations.

Due to the rapidly spreading fires, the operation was time-sensitive and required exceptional cooperation between all associated parties, with Chapman Freeborn, Volga-Dnepr Airlines, McDermott Aviation, the airports, handling agents, freight forwarders, and government authorities working together seamlessly and efficiently.

It is rare for AN124 aircraft to be mobilised on such a compact timescale; there are usually approximately 10 days to prepare the aircraft and cargo for the flight, but in this instance, there was just 72 hours.

Within less than 24 hours of receiving the request, preparation had begun, and just two days after that loading commenced onto the AN124s at Wellcamp and Perth. Permits and documentations can take several days to receive, however thanks to the expertise and teamwork of everyone involved, the helicopters arrived at their destination in Athens less than one week after the initial request came in.

This was the first time that four helicopters have ever been transported in Volga-Dnepr’s AN124s in a single operation, and the success and efficiency of the movement highlights the expertise of everyone involved. From the planning and preparation to the loading and unloading, the collaborative effort resulted in the helicopters arriving promptly in Athens alongside the rest of their fleet of Bell 214Bs.

Chapman Freeborn has decades of expertise in transporting a wide array of cargo to aid in humanitarian crises, including vaccines, medication, food, mobile hospitals and, indeed, helicopters. 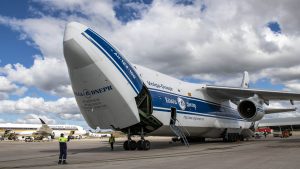 On Saturday 22 May, Chapman Freeborn charted a flight from Liège Airport (LGG), Belgium to Delhi Airport (DEL), India on behalf of Continental Carriers (P) Ltd. The flight arrived on Saturday 22 May and delivered 109 tonnes of a chemical called zeolite that is a vital component to provide oxygen.