The WMO is an agency of the United Nations, and it is dedicated to “international cooperation and coordination on the state and behaviour of the Earth’s atmosphere, its interaction with the land and oceans, the weather and climate it produces, and the resulting distribution of water resources”.

Meteorology, and more specifically weather, is a core aspect of any aviation company, and this is no different for Chapman Freeborn; keeping tabs on the weather conditions before a flight is essential for planning a safe and efficient journey.  This is something that the Flight Support team do every day for our clients.

However, that’s not to say that sometimes the unexpected doesn’t happen! Occasionally adverse weather conditions take us all by surprise and there are obstacles to overcome to ensure a successful operation. Here are some of our stories…

Snowstorms between Denmark and Mexico

Chapman Freeborn was providing flight support for a Fokker F27 Friendship aircraft ferrying from Denmark to Mexico. This turbo jet has a maximum capacity of 52 passengers, making it a relatively small aircraft. The flight was meant to smoothly fly from Denmark over Greenland, Iceland, Canada and the US, before landing in Mexico, however, a snowstorm hit!

As the F27 flew over the east coast of the US the snow became so treacherous that the pilot had to make the decision to land the aircraft; it would not be possible to safely fly through the storm to Mexico. 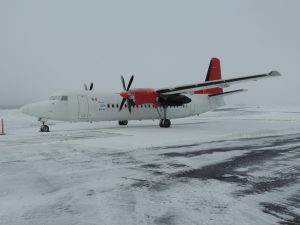 The F27 aircraft on an icy runway

But another challenge arose because the pilots were Mexican and they did not have the appropriate visas to stay in the USA! To circumvent this issue they had to remain on the plane until the snowstorm passed and they were able to take off again the following day to complete their journey.

A landslide in Uganda

A group of thrill-seeking travellers contacted Chapman Freeborn to arrange a short charter flight from a small airport to the main airport so they could embark on an adventure trip. However, adverse weather conditions caused a landslide on their route and they were unable to get to the airport to catch the flight! The aircraft was in place and ready for them, but the roads were unpassable. Chapman Freeborn however worked their magic to arrange the flight to another day at a minimal cost to the client. They were very happy, and once the roads were cleared they continued on with their adventure!

Footballers in the snow

A Premier League football team needed to catch a flight, but the weather had other ideas; heavy snow and icy conditions caused the whole engine to freeze over. Chapman Freeborn called upon an engineer for help, but it was too cold even for them, and nothing could be done until de-icers came to thaw it. The Chapman Freeborn colleague travelling with them was unprepared for these conditions, and was waiting by the aircraft wearing trainers in -36 degree weather! Once the engine was de-iced the flight could take off and the team arrived safely.

Chapman Freeborn saved the day by sourcing 5 replacement aircraft for a Dutch airline after a perilous storm damaged and grounded a large portion of their fleet. Hailstones the size of golf balls resulted in the aircraft being too damaged to fly, so by organising their replacements short notice and at the last minute, Chapman Freeborn kept things moving for the airline.

A monsoon in Myanmar

Chapman Freeborn were flying from Thailand to Indonesia in a Mil Mi-8 helicopter. This is a large variety of helicopter with twin-turbine engines.

The flight, which was meant to be a short and simple 3.5 hour journey, was thrown into disarray when it encountered a monsoon over Myanmar! The dramatic winds and heavy rainfall made it imperative for the pilot to make an emergency landing. 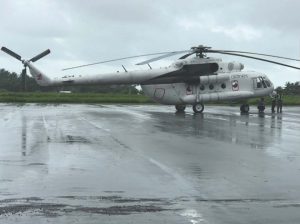 However, even this didn’t go as planned as it transpired that the place in which the pilot executed the emergency landing was the middle of where a military exercise was taking place!

Despite the inclement weather and the unexpected military interruption, the Mi-8 did eventually arrive at its destination in Indonesia safely.

Chapman Freeborn is proud to find a solution to overcome any bump in the road (or sky!) that may arise. The expert team has an abundance of experience come rain or shine, which is why you can trust them to be right there when you need them, whatever the weather.

Get in touch today.

Robin Byrne has worked in the aviation industry for 13 years. Prior to joining Chapman Freeborn as Marketing Manager for the Americas last year, she worked for Virgin Atlantic in Los Angeles in their New York headquarters and later for QANTAS and Air New Zealand at their Los Angeles headquarter offices.

Julia Postnikova has worked in the aviation industry for 17 years, 14 of which have been at Chapman Freeborn.

Helen Hollis has worked in aviation for over 20 years, almost 13 of which have been at Chapman Freeborn where she works as VP Passenger Charters Americas.