The team utilised an A330-200 aircraft to transport the approximately 30 tonne load from Hanoi to Stuttgart on a 12-hour nonstop flight. The textiles were loaded into the cabin and lower deck of the aircraft, which was a converted passenger aircraft, also known as a preighter or P2F. To increase the cargo volume, the seats of this aircraft were removed.

Handling a preighter was a highlight for Stuttgart Airport, as they have rarely been used until now.

Chapman Freeborn Cargo Charter Broker Raju Schauer was on site in Stuttgart, and ensured the operation went smoothly. For the offloading, a manual rail system was used within the aircraft, speeding up the process considerably. 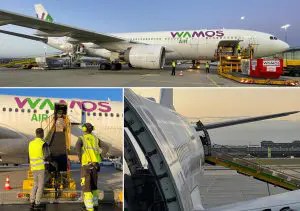 Stuttgart Airport also provided a luggage belt for the quick removal of the cargo from the cabin, meaning that offloading was completed in just 90 minutes before the cargo was ready for its onward transport. This set a new record for fastest offloading, even for the experienced Chapman Freeborn team!

Martin Ziegler, Senior Cargo Charter Broker at Chapman Freeborn, said, “For the successful handling of a charter flight good teamwork is vital – both within the Chapman Freeborn team and with our customers and partners.

“For this transport, the Chapman Freeborn team from Singapore worked hand-in-hand with their colleagues from Frankfurt. Additionally, the close cooperation with Hellmann Worldwide Logistics, the staff of the airline Wamos and Stuttgart Airport made this project a success.”

Chapman Freeborn’s guide to the best and easiest safari travel

Africa is a diverse and fascinating continent which offers a whole host of unique experiences to suit all manner of interests and tastes. One of these things is safari.

On 28th October Chapman Freeborn South Africa held its annual golf day at Benoni Country Club, in Benoni. The event, which aims to be an enjoyable opportunity for people to come together and network, was organised by Air Cargo Operators Committee (ACOC). The event saw 140 customers and partners take part to create 35 four-ball teams. Chapman Freeborn entered 3 four-ball teams, with team 1 finishing in 5th place, team 2 in 6th place and team 3 in 11th place.